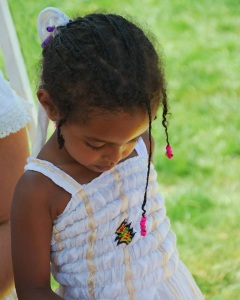 Every year I send photos to Davy’s birth family in Ethioipia. They are simply titled “Dinkinesh ages 3-4”. In it I try to sum up a year in about 100 photos. How do you sum up the essence of who your child is in 100 photographs? This week I started to compile the photographs and I was really stuck by how much change occurred this year. Very specifically this summer we have seen huge changes.

We always say that Davy’s cognitive leaps are so much painful then her physical leaps. At the end of July we took a trip to San Francisco and it was a really hard trip. In part, when Davy acts like a horrible 3 1/2 year old I really start to question my parenting abilities. This was a really really hard week, in a busy city, with a cranky kid. It was horrible. I left me feeling very depressed and like I was the worlds most mediocre mom.

Then at the beginning of August, Davy took a really long nap and woke up so much better. She began her imaginative play, she began making up games with her friends, she began to show empathy, she started telling really long stories. One day a friend made her mad and she got so emphatic, explaining what she did that was wrong. I had to laugh. She recently, she went down to my sewing room and said “wow you like to make stuff” and I said “its what i do, i make stuff for people i love”. She said “thank you momma”. She got it, she is growing up. She know’s love comes in many forms.

Yesterday she took another long nap (now becoming a rarity), and I swear, she grew two inches. That’s how our girl rolls.

Tonight she ate dinner outside, away from the adults with her two beloved friends Abe and Beti. It was so small, but it felt so huge. She is becoming a kid, a peer to her much older friends.

This summer a very dear friend was visiting. We took her and her family to this water park downtown. It is a tiny waterfall that all the kids can play splash in and its a local favorite. Someone had left this giant beach ball, and Davy took off rolling around and splashing the water. She was lost in her own physical self. This tiny girl with her giant ball. My friend said, “remember this image, because that is the best of childhood”. I will never forget it.

So in our 100 photos, I wish that I can explain all these thoughts. That this kid that we share, wakes up and is a different person, that she dances every time she hears Katy Perry, that she can be happy in her own world with a ball and water, that she knows how to be an amazing friend, that she understands that she is SO loved by all that meet her.

I think about going back to Ethiopia every day. Every day. I want them to know her as we know her. Someday we will go when she is ready. For right now, 100 photos will have to do. 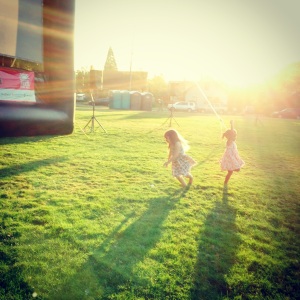